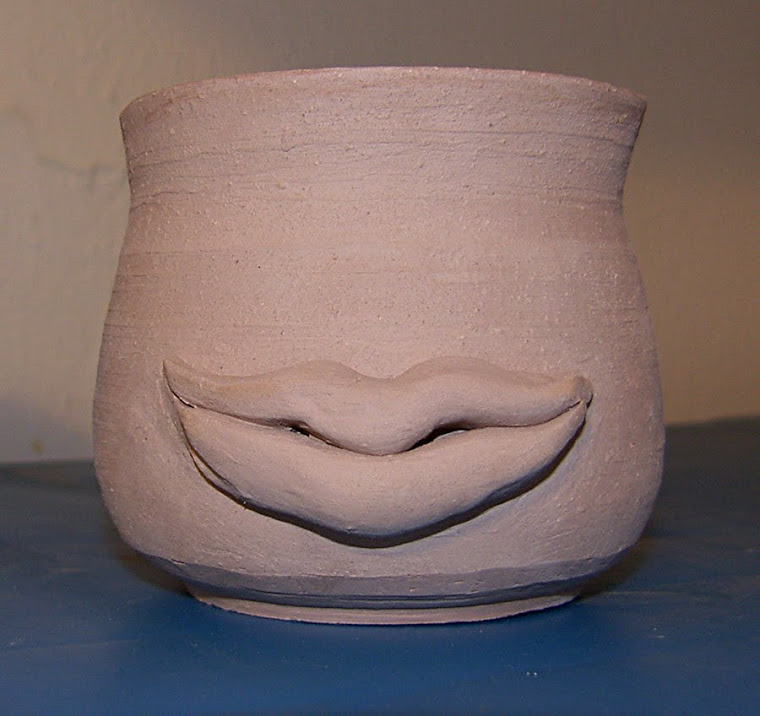 Well I've had a hell of a fine season making, glazing and firing monsters.  They've all been adopted out to loving families.  Here's a picture of Casey's babies before he came and picked them up and gave them all away for Christmas: 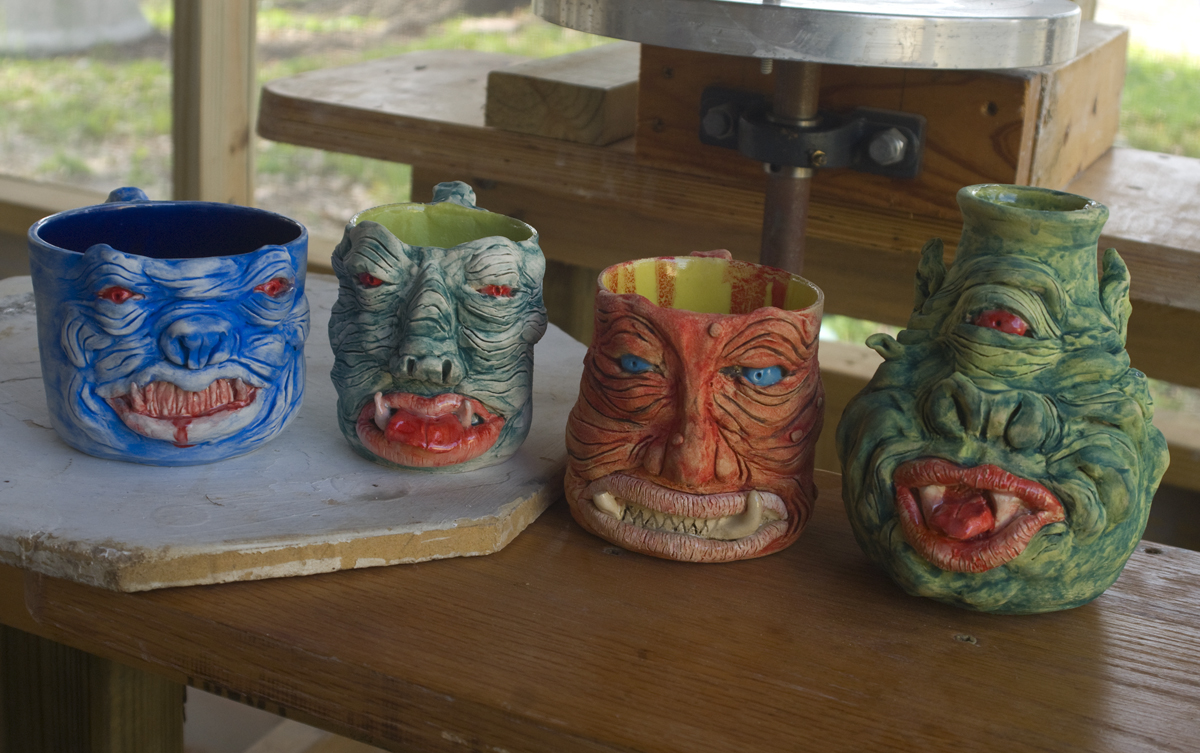 These guys are pretty damn ugly and make perfect drinkin' buddies.  They don't talk much, they are good listeners, and they keep their mouths shut about all your secrets.  (Truthfully, they don't have a damn brain in their heads and can't remember a thing you tell them, but they are loyal -- so that's a good thang!)

You can order these custom made by messaging me here, or by going to my facebook Monstermugs
http://www.facebook.com/pages/MonsterMugs/154842774541834

You can see all the monstermugs I've made so far here
http://corazondedios.deviantart.com/gallery/10665024

There's a passel of them.

Well, I hope you have a very Merry Christmas and a Happy New Year.  I plan to.  I've already got mugs ordered by people for me to start making next year (as in a week from now). I've got to keep on potting!

much love
DJ
Posted by CorazondeDios at 1:49 PM No comments:

Here's Oil Spill Sally.   She is just one of the millions of victims of British Petroleum's oil spill in the Gulf of Mexico.  We will be feeling the results of their horrific rape of the Gulf for decades to come. 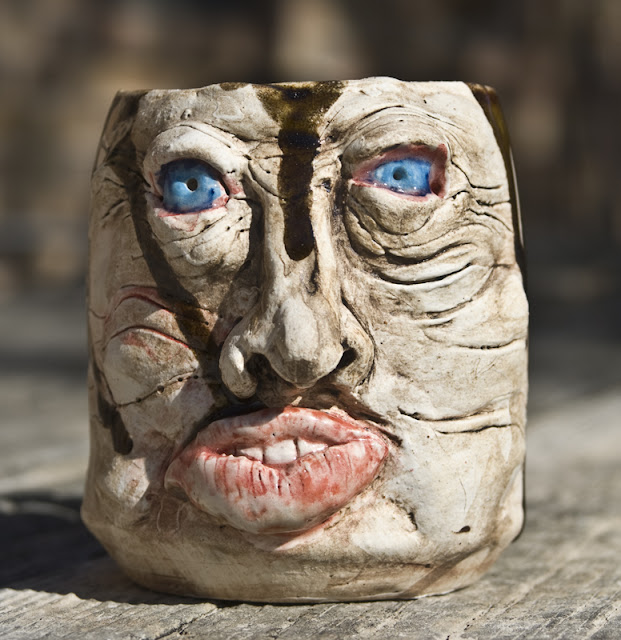 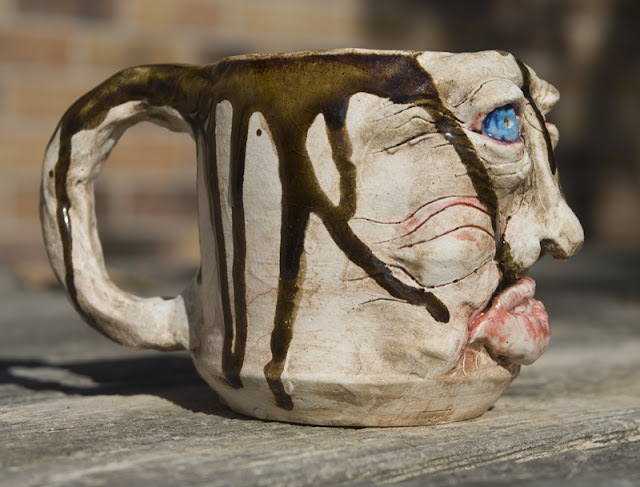 Posted by CorazondeDios at 12:39 PM No comments:

I finally got her fired.  I'm going to make more of these! They are so fun and ridiculous and great to drink coffee out of.

Angelina Jolips is selling herself for Christmas! $30 gets these lips on your coffee every morning! 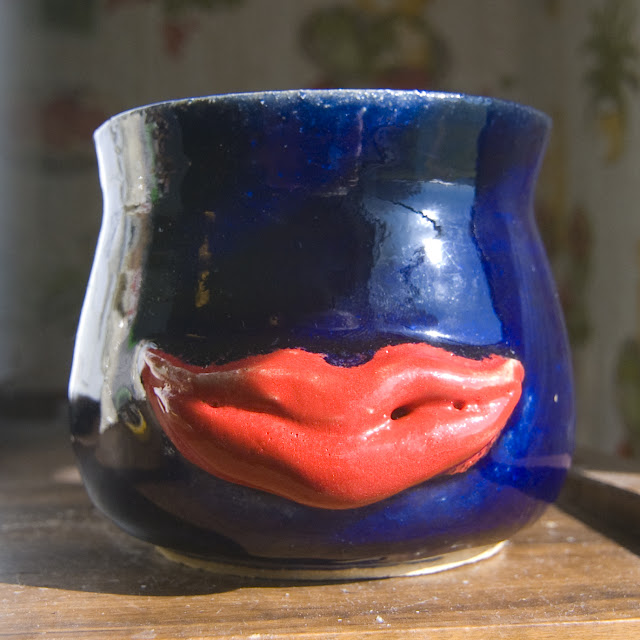 Posted by CorazondeDios at 1:30 PM No comments: 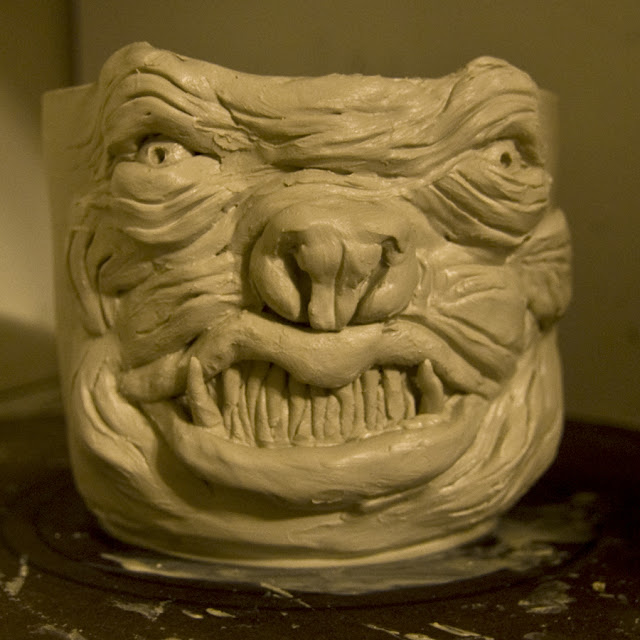 Casey, you asked for it.

Name him and weep!

DJ
Posted by CorazondeDios at 3:41 PM No comments:

Here is my latest Monster Jug 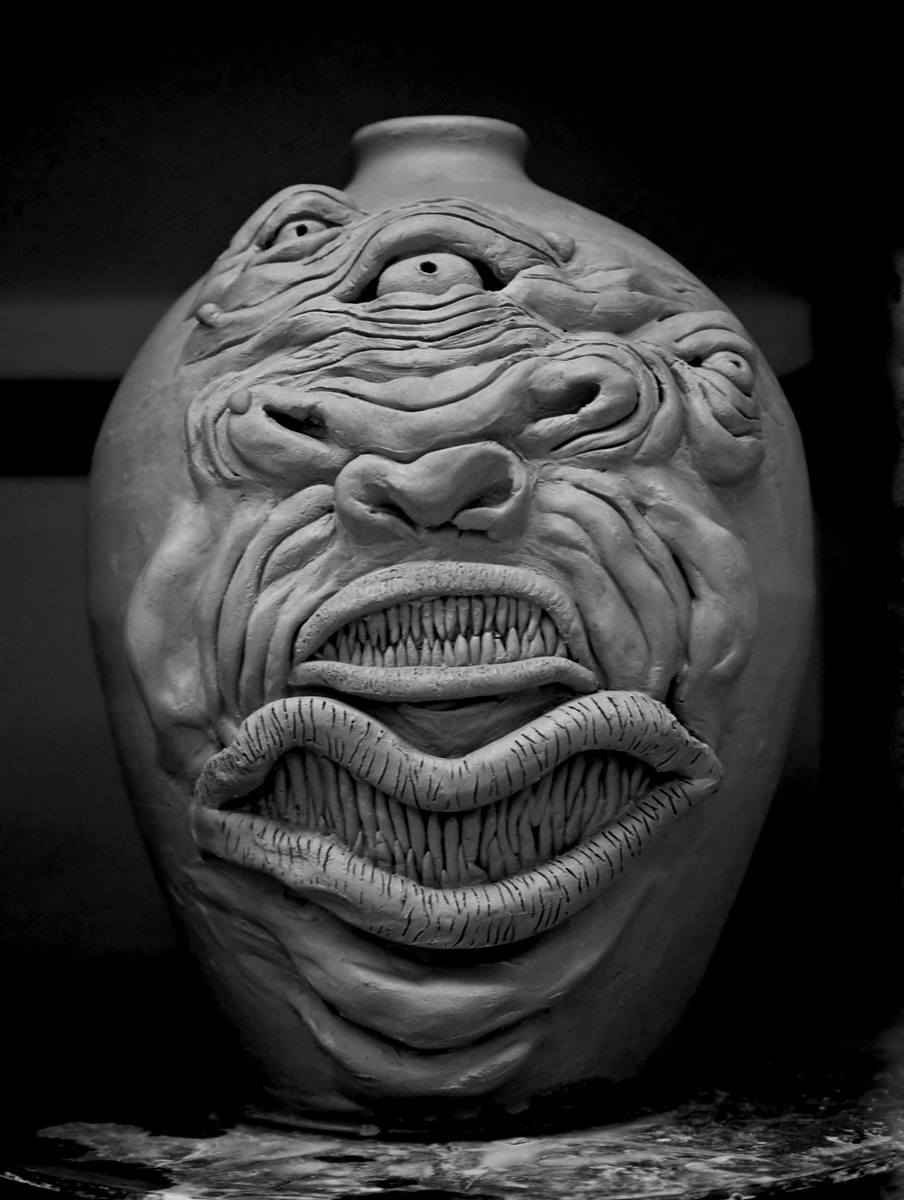 Posted by CorazondeDios at 12:22 PM No comments:

On clayart, an email list I belong to, there is a running thread about what influences the potter.  Many people there have been potting for decades, but I have only three scant years to my craft.  So I cannot claim to be so good a potter as to have "influences" from those long schooled in its arts.
Yet, when I thought about it, the very medium itself was a mind-blowing experience when I grasped the awesomeness of a plasticine soft mud that through my efforts, could change into virtually anything I could imagine and craft.

The clay itself influences me -- the smell, texture, feel of it.


Every  potter I see leaves an imprint on my mind. I love Kumano pottery. the guy is insane. He fires his kiln to temperatures identical to those inside a volcano!  His stuff looks like living stone
http://www.osakaprints.com/kumano/content/kumano-sales.htm Conversely, I love the ethereal perfection of Miyamura
http://additionsstyle.blogspot.com/2009/10/artist-to-know-hideaki-miyamura.html 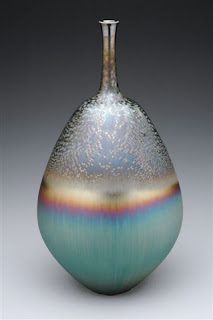 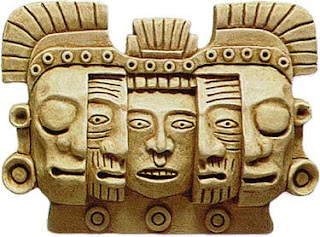 The more I think about it -- what "influences" my art -- honestly,  its not so much influence as inspiration.


I have had to process a LOT of data since I began pottery so late in the game -- at age 55.  Many here have been working with clay for decades. I've only been at it for three  years.


I began to collect images of clay as a screensaver  for my computer -- it was the easiest way I could compile a slideshow study to run through my brain and absorb the awesomeness of clay under the fingers of thousands of different clayists (somehow, artist does not suffice, nor do the words potter or ceramicist),


I have over 2 gig of images collected from everywhere. Not just images of finished art -- but images of kilns and firings and happy potters smiling over spinning clay,  pictures of studios and hand made brushes and people glazing, greenware and bisqueware -- every aspect of this all encompasing artform.


Glaze chemicals themselves are an inspiration, mystifying in their inert powderiness, which, when mixed, leaves behind their dull cocoon and explodes into an array of volcanic color as they embrace and seduce the vessel they cover.


The awesome elemental forces of clay -- earth, fire, water, air -- all delight my deepest paganess despite its veneer of 800 years of Christianity in my Celtic lineage.


In once sense, I have no "influences" -- no pedegrees pompous or otherwise -- in terms of emulation. I am simply trying to learn the craft through repeated, careful, joyful pursuit of a simple objective.


much love
Posted by CorazondeDios at 2:42 AM No comments: 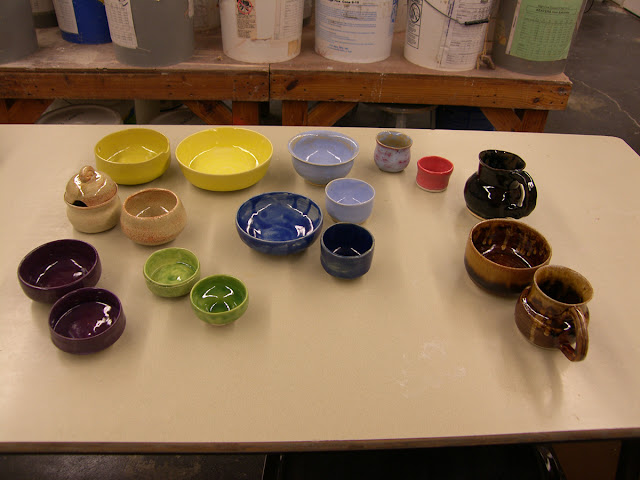 MOST OF THE PIECES ABOVE HAD THE GLAZE BRUSHED ON WITH A HAKE BRUSH.  EVEN THOUGH I TRIED TO BE SURE AND BRUSH THE GLAZE ON VERY THICK, STILL A FEW OF THEM WOUND UP BEING TOO THIN IN PLACES -- with the exception of Heidy's Eggshell, which just does good no matter what you do to it.

Still, the pieces came out with nice bright colors. Although there was an issue with thinness in places due to brush application, basically, it was a good firing and I learned a LOT from it.

ACTUAL FIRING RAMP note: kiln lid was cracked open for 14 hours of firing. it was 1900 degrees when Jen closed it. My bad. Hence the ramp was slowed to about 150 degrees per hour for 14 hours. Maybe more 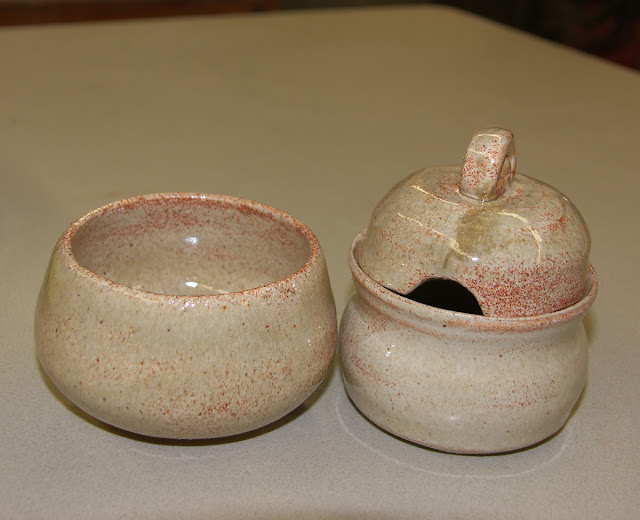 Again, HEIDY'S EGGSHELL GLAZE performed admirably.  It did not mind the slow cool at all. The colors are fresh and gorgeous.  The glaze came out very even.  I found that the areas where it is thinner are where the lovely rusty tones come out.

EGGSHELL -- tried and true from Ceramic Arts Daily
DJ'S GRAPE GLAZE
The Grape glaze with cobalt carbonate came out a perfect purple -- even better than the same recipe using cobalt oxide.  Jen said that this was the first time she'd seen a glaze come out actually purple instead of dark blue. She said, "That's DJ's Purple" -- I'll check to make sure its not just a derivative of Jeannie's purple.  If it isn't, then I guess its DJ's purple all right! I'm pretty sure the great color is due to the slow cooling at 100 F an hour from 1800 to 1300 degrees. It brings out more red. 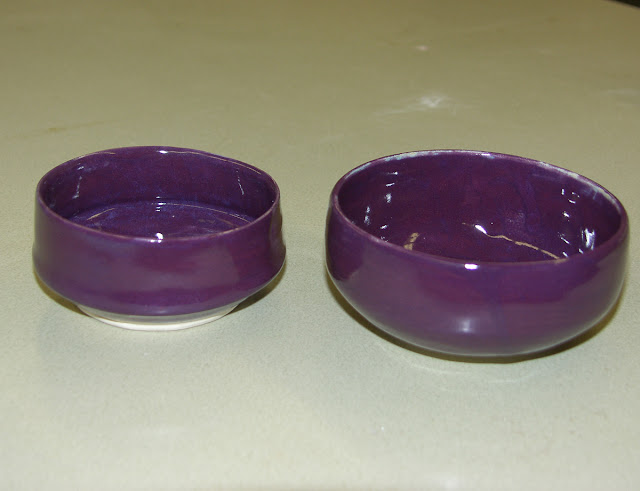 RASPBERRY BLUE BUST!
Alisa Clausen's Raspberry blue, whose image I loved so much and researched so hard to mix correctly turned out to be a bust.  It's a glossy, watercolory sort of glaze that looks like diltued cobalt blue -- its cool if you want that sort of effect -- but I didn't want it.  I'll try it again dipped, but I think its just going to be a translucent cobalt blue. 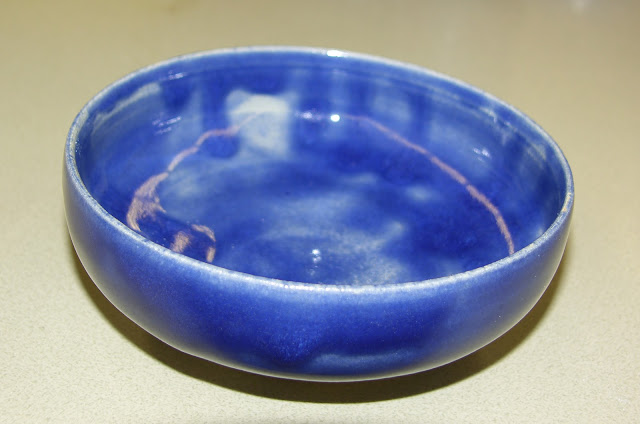 Well, they are both blue, that's for sure.  I like seeing the glaze on an entire piece rather than a small rectangle of it.  I'll make sure that I mixed it right, but after mixing it three different times, I'm pretty sure that I did. Anyway, I don't like how it turned out.  I'll try it a couple more times, put on thicker and also try it on a couple of different clay bodies.  But so far, its a "meh." 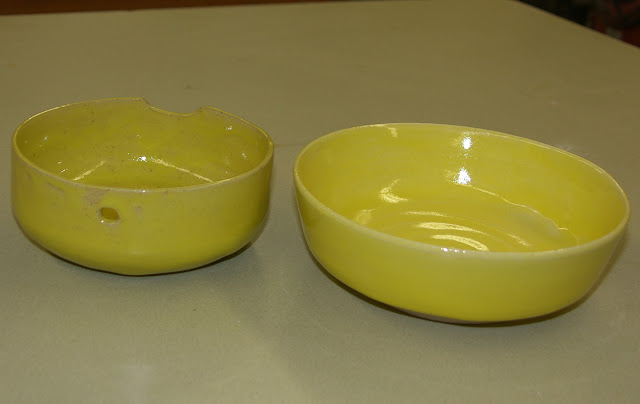 The praesyodimium yellow gloss came out muddy looking onf the buff clay that I've been making Laszlo's bowls out of.  It looks great on the white clay body next to it.  SO I'll make some bowls of Cinco Blanco and try it on that.  I also am going to try it with a bit of tin in it as an opacifier,  In the gloss white base, its quite translucent, so the buff claybody cannot work well with it if you want a pure yellow.

This color is for one of the marine monster jugs that I have made.  I like the effect of the k17 on top of the chartreuse.  I'll have to get the K-17 recipe from my google docs excel files of the school's cone 6 glazes.  It's nice the way it highlights the texture on the right teabowl. 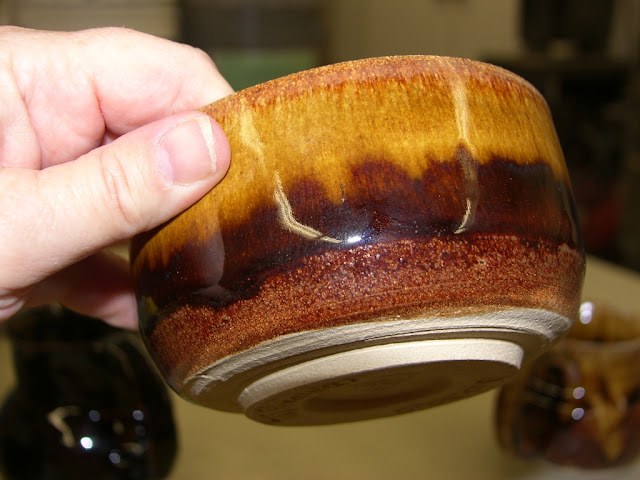 Where it was put on thick enough, it came out great.  On the mug below, its mediocre.  I'll mix up more next time around and and put it on THICK! This glaze should probably be dipped, not brushed on.  Where you see it come out so nicely on the above piece is where I dipped it in the small amount that I mixed up. 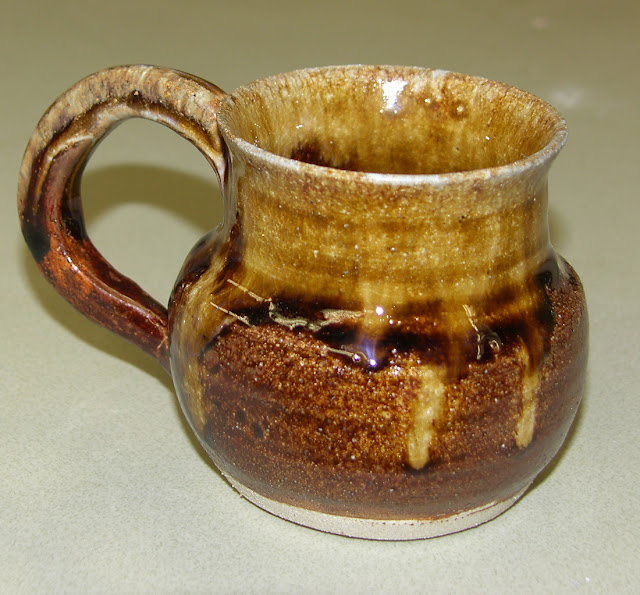 The center piece was strontium opal blue over candy apple red.  Yeah. Yucky.  Still, it might be a good effect over a different color.


FLOATING BLUE OVER CONE 6 OHATA
DO NOT MAKE THE MISTAKE OF SLOW COOLING THIS GORGEOUS GLAZE!
Normally this is a killer combination 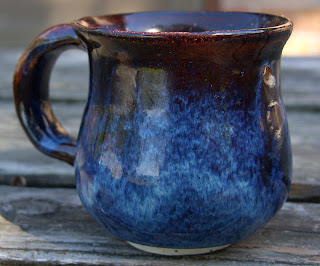 but in a slow cool, with a thick coat of Ohata and floating blue on the piece -- it just turns blackish brownish blue 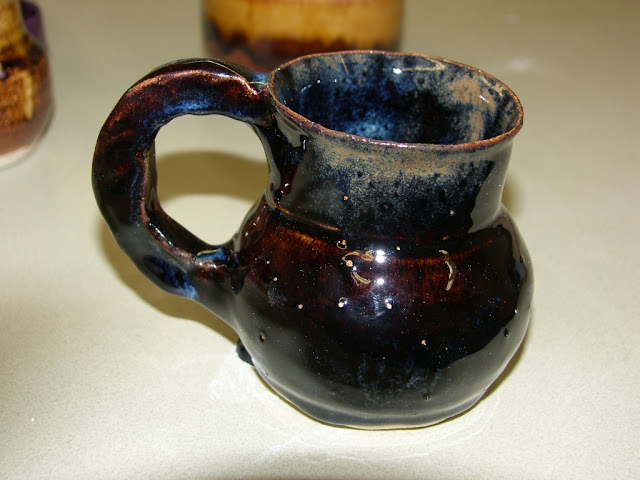 The flash makes it look nicer than it really does.  It is basically an inky black with vague hints of some color that MIGHT be there in the glossy blackness. This piece was dipped first in Ohata cone 6 and then in floating blue.  I did quick dips because I did not want it to run under the handle like the last piece did.  I even washed off the glaze under the handle more to help it not run, but it ran and puddled on the cookie under it anyway.  Next time, I'm going to try BRUSHING on the Ohata and then dipping it in floating blue.  Hope it works.
Posted by CorazondeDios at 9:00 PM 15 comments:

CorazondeDios
I believe that Sun Myung Moon is the Messiah